Our crazy jiggers’ Team are still eager to fight! They trust us staying around Rodrigues. An unbridled jigging activity will be their reward. The Hawkins expedition or the Eastern Bank remain mythical. As we wrote you in May, many spots around Rodrigues may hold big surprises. These 3 days just prove it. Many doggies (35 kg for the biggest), Giant Trevallies, bluefin trevallies, gold spotted trevallies, red coral trouts, seriolas, lyre tail coral trouts, yellow tailed emperors and even wahoos… And also many released! A sailfish has also come for a jig before leaving. Trolling activity was only practiced in between spots! There were many pieces of fish , dorados. But surprisingly, we could have expected them bigger for a beginning of season. You will be able to find out all these video trips on our Facebook page, soon on You Tube and our web site. 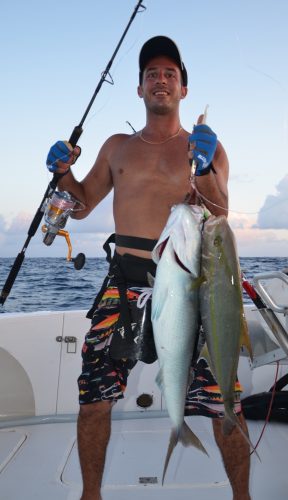