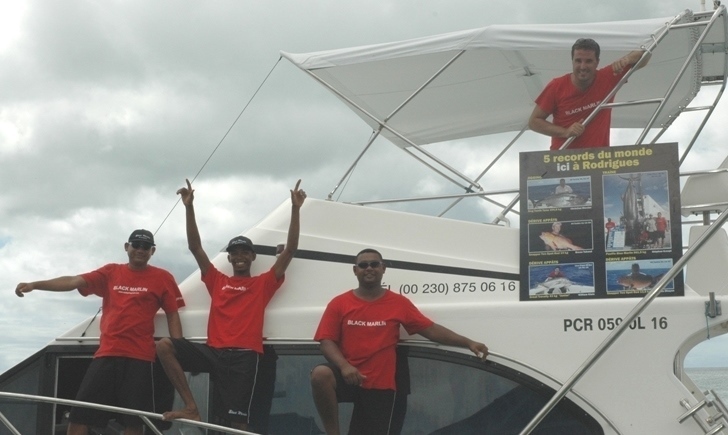 We actually had 2 free weeks in February. Some fishermen wanted to avoid the “cyclone risk” this month. While the cyclone BINGIZA was landing in Madagascar, another perturbed zone was directly concerning us with a low atmospheric pressure of 1003 hpa. Yann really likes these troubled times when pressure is low. Since 21 years we have been living in Indian Ocean, we have definitely noticed that fishing is much more successful, especially for marlins. No alert, no risk by 24h .Thursday 17 February 2011, 8.00 AM: Yann and his 3 mates Fernaud, Steeve and Mario leave for the Great Eastern Bank, “for fun” on their own. The sea is rough but every one well knows oneself safe aboard the Black Marlin and its 26 tons weight. Of course, we still remain in contact by satellite phone. In the evening there is full activity but a few catch only (a small marlin tagged and released). During the night, the system has increased and, on the land, we find that the wind blows harder at 30 km/h up to 60km/h. At 10.30 AM, Yann leaves the Bank after a good go in the North (a small sailfish tagged and released) and beautiful yellowfin tunas caught between 6.00 AM and 8.30 AM. On the way back (the Southern Bank) and on Marlins’ Boulevard from 10.30 AM to 3.30 PM… it was just crazy on trolling! 8 strikes of marlins: 1 released, 3 unhooked and 4 aboard as well as 2 beautiful yellowfin tunas including 2 between 20 and 30kg, and 5 ones between 40 and 52kg including a triple hook up…and 2 10/0 hooks straitened. Of course, the team is on cloud nine but the God Of The Winds urges them to come back home. They finally arrive on the 18th at 10.30 PM with 7 flags! Yann had a look in his archives. The Big Game Fishing Club of Reunion organised an internaional meeting on 21 and 22 February 1997 (Reunion, Mauritius and South Africa). The cyclone KARLETTE interrupted the competition. On the 22nd in the morning, we had reached the first alert. The 22 boats with their teams were ready to go and fight from 6.00 AM. The organizers could not authorize the competition to carry on. 21 strikes the previous day with 7 marlins caught and 1 tagged. There was no long chat, therefore every single team would go fishing on its own. This Sunday 22nd February had not been officialised but that was even better than the day before. Of course, the Colas Family was on date aboard Equata with Yann (not even 17 years old), Sophie (23 years old) as a skipper and Alain the father. Annie was on the land intending on the radio. An approaching cyclone and/or low pressurised systems are really favourable to fishing especially marlins and yellowfin tunas. You just needed to have a look at the eyes of our deckahnds saying: “Hey Captain, let’s go back there for the next cyclone!” We clearly understand that this cyclonic period may cool some fishermen’s ardour, but it can also be a good opportunity to live such a human adventure so indescribable. What is to learn then? Same causes same effects… Such as Napoleon’s men, the Black Marlin Team of the 17 and 18 February can now say: “We were there!” Whatever, you know that you have an experienced team aboard a safe boat. We would like to thank Mauritius Forecasts (Vimal) and Meteo Reunion (Lionel and Patrick) and the CMRS for the quality of their information and precisions in their websites. 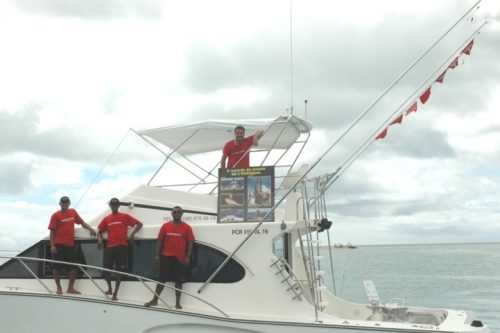 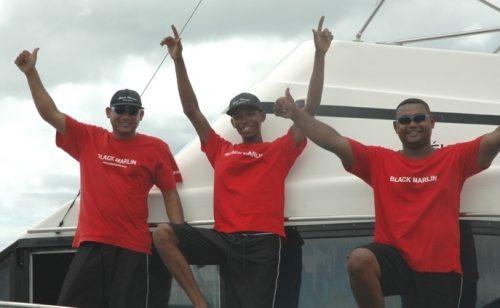