What a pleasure to tell you about this extraordinary catch by Mathis (8 years old) on Oct 30,2017. 89.5kg for this doggy ! IGFA approval in progress. Answer within 4 / 5 months.

Mathis 8 years old should long remember his first day of exotic fishing on Black Marlin skippered by Yann Colas on Rodrigues Island in the Indian Ocean. His dad, Guy had come alone, at the end of February 2017, to share a third fishing trip. He thought that his son could compete in the small fry category to beat the world record set by Baptiste Souyris on November 1,2016 with a 9.5kg doggy. This record was in the process of being approved by the IGFA (International Game Fish Association…)

Mathis and his daddy board Black Marlin on October 30th at 08h.… for the first 46h session. The weather ? … a lake for Rodrigues ! Yann decides to stay around Rodrigues. All the fish will be for Mathis, just to complete the training. Early in the morning Mathis, records his first discharge on a live bonito with a shark that will then cut the leader. Failure… but his relaxed touch and during the first few minutes of combat surprised the crew ! 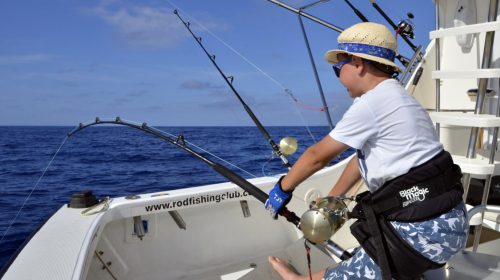 During the fight, Guy and Yann are more stressed than the young fisherman. The little one doesn’t panic, he rolls without any particular excitement. Strange, the fish doesn’t give a whimsical headache, a real dead weight. It’s only 23m later that the fish is identified… It’s a doggy, a big one, which now floats at 40m ! It’s the euphoria on board… but Mathis doesn’t measure this moment ! He continued to grind until a lineman grabbed the leader… Two gaffes were planted in his head to hoist him on board. It’s really very heavy! It’s just unbelievable… 25mn of fight in total. Everyone congratulates each other, kisses. Indescribable, these moments of intense shared happiness ! 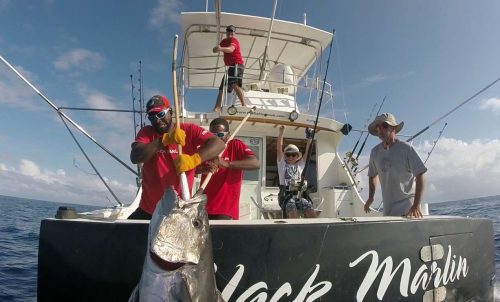 We will return to the port at around 7:30 pm for the weighing where about fifty people and the local press are waiting for us. Bets are firing 80,85,92,102kg? The scale scrolls through the digits before stabilizing at 89.5kg. It’s the general euphoria. 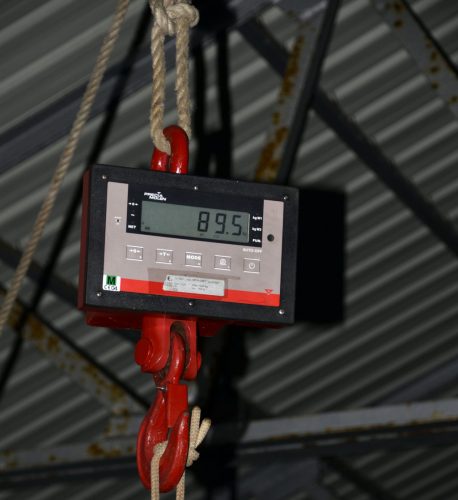 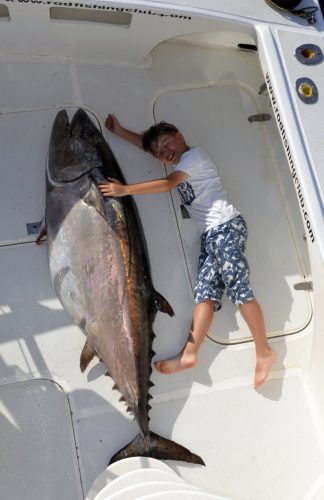 The application for registration is completed and will be sent to the IGFA along with the original video rushs of the fight.
On second thought… going from 9.5 to 89.5 kg… at 8 years old is crazy! It takes a lot of luck…
So we are in line with this quote from Pierre Trudeau:
Luck is when preparation and opportunity meet.
Mathis will have plenty of time to appreciate his achievement by thinking about the fine line strokes of young colleagues, all world recordmens, approved by the IGFA in the category Small male fry (to name but a few…)
Koen Norton is 10 years old on April 10,2015 when he caught a 384.5kg bluefin tuna (tuna blue fin, thunnus thunnus) at Fisherman’s Bank, Prince Edward Island, Canada.
Ian Hissey was 10 years old on 27 April 1997 when he caught a 312 kg tiger shark (Galeocerdo shark tiger vat) at Port Stephens NSW Australia.
Robbie Angus was 10 years old on February 02, 2005 when he caught a 227 kg Pacific blue marlin and a 256.27kg black marlin on October,2005 at Ribbon Reef Australia.

You can still dream…. Other records are possible in different categories and species!