It has been raining since March 12th, and it did not stop. Rodrigues then registered rainfall records. The 65hours trip on Hawkins changed for a 28h one around Rodrigues. Cecile could have caught a jumping sailfish about 40kg on trolling, 2 tunas of 17 kg, 2 nice jobfish of 11kg each, a wahoo and a doggy of 33.5kg. 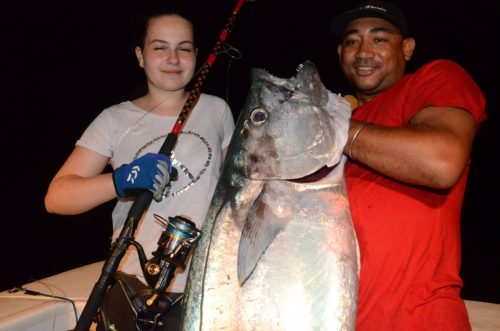 Then, she improves her world record however it cannot be homologated since she was helped during the fight. 2 giant trevallies about 12kg and 20kg have been released in very conditions. While drifting, Alban could jig a little. He released a few small doggies and caught some rainbow runners to eat. As usual, activity at sunset was good but there was also bad luck. Cécile lost a beautiful doggy 15m off the boat and Alban as well. 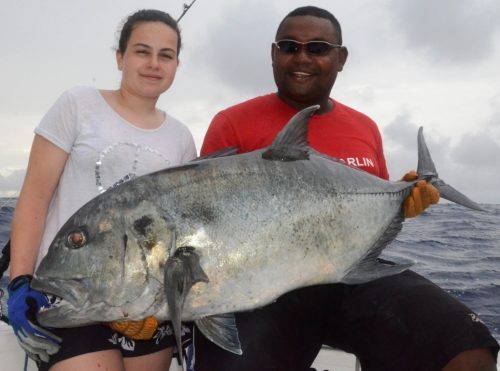 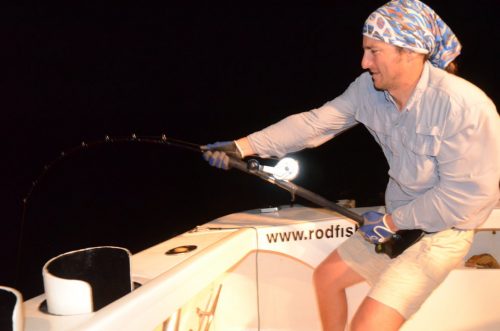 We thank him very much for the nice moments we shared. Our 2 champions already come back in November with their father (Cecile will still be in the junior category while William her brother, junior world record-man, will then be in the senior category!)

We are glad to see that Tourism Office of Rodrigues committed itself in the promotion of big game fishing for our island, inviting Alban Choinier, a major figure in big game fishing and a famous reporter specialized in Fishing in the French magazine Voyages de Pêche.

You may find the pictures and the story of this last session in a future edition of the magazine Voyages de Pêche.