Pierre, Louis and Marc (France) make up a team for the first time on Black Marlin, for 2 fishing trips of 89h and 65h on the Hawkins Bank. Instead of the 23kg of the usual fishing tackle, Pierre had brought 23kg of food from Poitou: pork sausage, raw ham, small chiterlings sausages, black pudding, cheeses, foie gras, wine and champagne. If the weather conditions have a little changed the initial program, everybody has gone on a spree. It is true that it was a great way to introduce oneself and create a good atmosphere. On the 2nd, in the morning, our 3 mates have gone for nice yellowfin tunas and a marlin around Rodrigues before heading to Hawkins after the sunset. The activity was small while jigging. However, on trolling  there were nice yellowfin tunas (over 40kg), wahoos, dorados, 2 marlins: 1 black marlin embarked and 1 blue marlin tagged and released. 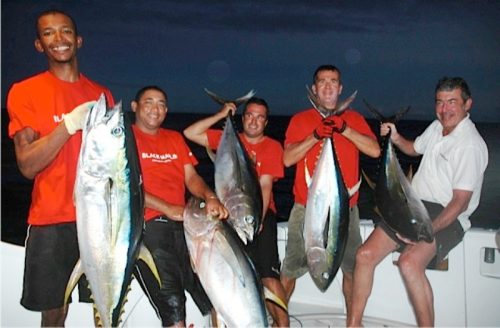