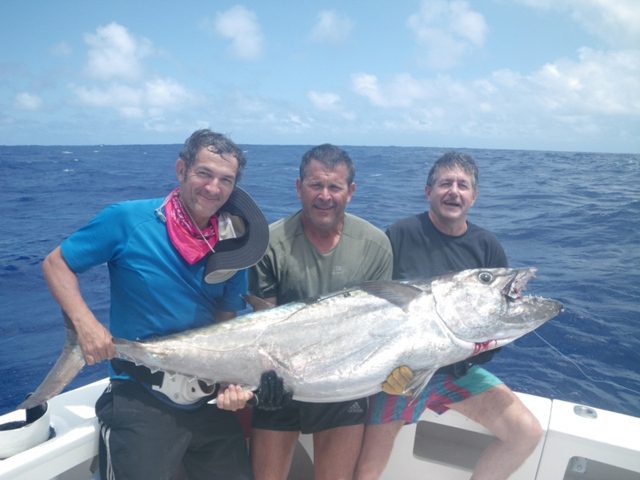 This extraterrestrial team which operates since 2005 over Rodrigues, does not count any more all the hours spent aboard the Black Marlin. They unchained a 58h 3XL with a 65h trip on the Hawkins Bank. Claude was part of the team who first prospected this new spot on April 2010 (See MVP N° 82 September – October 2010). Therefore, he did not want to miss the first fishing trip with his friends.

If the first part of their trip around Rodrigues is correct, this Hawkins Bank will definitely go down in the annals of fishing reports. It gave them no rest to those who would have liked to carry on: numerous doggies, including 2 over 50kg on jigging, beautiful wahoos over 20kg,  giant trevallies of about 20kg, amberjacks between 12 and 15kg (a new club record by Claude Port)… and Christian (our world recordman with a doggy of 104.5kg) achieves an other club record with a sailfish of 54kg. Claudius made a few popper castings, which created a stamped among the doggies. As a matter of fact, Christian and Pascal were “well hooked” on jigging, so Claudius had to exchange his popper rod for his jigging one. He remembered that Christian caught his trophy in same conditions about 3 years ago on the Great Eastern Bank on 25 October 2007.

Unfortunately, the weather conditions shortened the trip. It takes 12 hours to go (the departure takes place at 6.00 PM in order to arrive at around 6.00 AM on the fishing zone) so that we don’t lose too much time, we have dinner aboard and put the world to rights, everybody on the fly bridge!

The way back takes about 15 hours: a 2.5 m swell, more than 20 knots of wind and current… Nobody left on the fly! If the return time seems long, (starting at around 10.00 PM after a fishing day) the reality is much shorter, because almost everybody sleeps on the two journey’s nights, there is also dinner time and breakfast. Anyway, it’s better for our anglers to make the journey by night than by day!