Barbara and Bernard came in 2006 and 2008. Maurice is used to come in Rodrigues; Pascal comes for the second time and Michel for his very first. We left at 9.00 PM, fish hooked from our arrival on the bank, at sunrise. Yellowfin tunas’ activity is really nice, 36kg for the biggest by Pascal who also saw his 50 kg doggy crunched by a big shark, beautiful wahoos (18kg for the biggest) and several bottom fish at night (rainbow runners and jobfish). On the second day, taking into account yellowfin tunas and bonitos’ activity we look for marlin. One after another, 2 marlins came around our live baits, without touching them. Barbara fighted and released a nice white tip shark for lack of doggy’s record. Paradoxically, while trolling, Maurice hanged on fighting “7 hours long” with a big black marlin badly hooked, before seeing the wound channel scrapping. Disheartened, the punch is likewise welcome, as well as a well-deserved sleep. On the last day, “black series” carries on with a marlin unhooked trolling, but with a good activity as concerns the other pelagic. The trip seemed well launched. 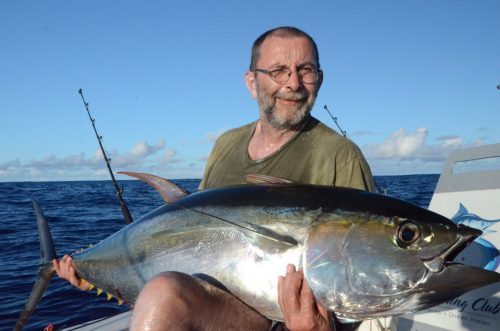 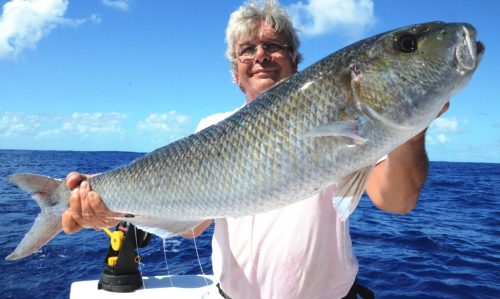 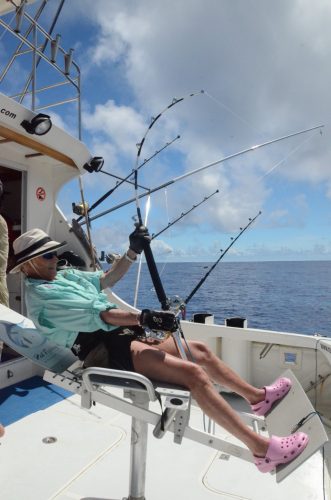