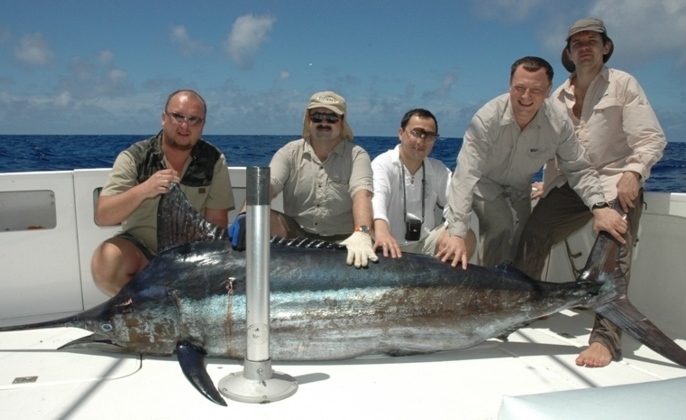 For the third consecutive year, our Russian Team had marlin as target. 2 x 34 hours XL trips were to occur. Unfortunately, the weather conditions only allowed them to go for a 58h 3 XL trip the following day of their arrival! Poseidon was with them. As they left at 8.00 AM, Alexander catches  on trolling his first blue marlin estimated around 220kg at 11.30 AM. By common consent we carry on our way to the Great Eastern Bank where our Russian Team is welcomed by a festival of yellowfin tunas. Beautiful giant trevallies over 25kg are caught and a beautiful black marlin hooked on live bait unhooks right by the boat. Another marlin swallows a yellowfin tuna while fighting and spits immediately.

However, the anglers are happy and the national anthem sounded on the Bank as usual, since 5 years now when one catches a big piece. Weather conditions are harder than we planned for this last day. It requires us to use our very secret techniques. Numerous doggies and trevallies (lots of which were released) come in the end. They will come back next year, the target is to define though!