First was planned an 89h XXtreme trip on Hawkins, but the weather transformed it in a 62h trip on the Eastern Bank + a one day trip 2 days after. Philippe «Globe Fisher» for 25 years, had booked this period with 2 friends for their “first tropical fishing trip”. After a few dorados caught on Marlins’ Boulevard, yellowfin tunas and wahoos welcomed our arrival on the Eastern Bank. From 07.30 AM the following day, Philippe Great Lord, let Regis catch his first black marlin (like all the other pieces of fish during the trip) after a 45mn fight chiefly masterminded! The sea was grew and made jigging impossible, crossed swell and reverse current. Coming back trolling, we crossed a tremendous wahoos’ activity where Pierre has excelled, 25kg for the biggest, but all between 14 and 20kg. At sunset, Philippe caught, jigging, his very first doggy of 15kg. The weather forced us to come back close to Rodrigues during the 3rd day, catching a few wahoos and yellowfin tunas. The 4th day around Rodrigues we concentrated on jigging and baiting and it was a 15kg Giant Trevally that hooked on a lure trolling. On jigging, a nice rise of doggies was gashed by the voracity of sharks. One can be certain, Regis and Pierre can now face any single sea around the globe! We shall be glad to see you again! 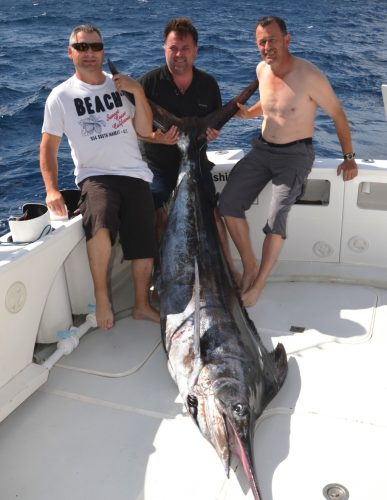 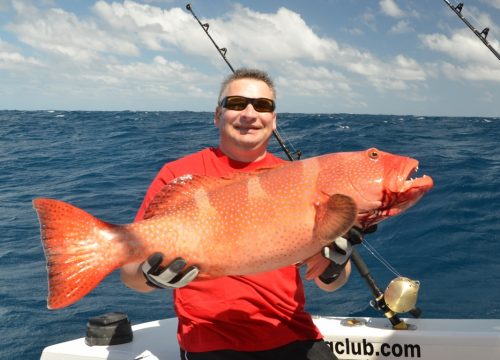