Gerard, Alain and Raphaël from Hyeres Fishing Centre (France), as well as Daniel and Arnaud from Cap Breton have struck again.They already caught:

Well, since the 25th January 2014, for their first one day trip around Rodrigues, they’ve done really well! The very first Grand Slam of the year (3 different billfish within the same day).

4 strikes = 4 billfish aboard. There is yet 5 fishing days to come.

Another record has been established by Gerard Crosetti (75 years old) with a blue marlin about 100 kg, caught standing up within 25 minutes on trolling.

CONGRATULATIONS GEGE! Many must dream being like you at your age! 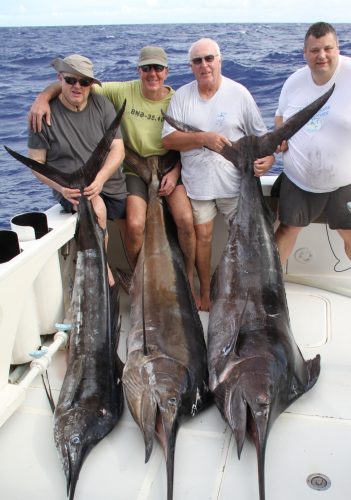